Angthong National Marine Park
The most common question people ask me - what is the most interesting and popular tour on Samui?

In my opinion it is a full day trip to Angthong National Marine Park which is a fascinating archipelago of about 40 islands north west of Koh Samui. It occupies almost 250 sq.km and includes 50 sq.km of limestone islands, which look pretty dramatic as they rise from the sea. There are caves, hidden lagoons and beautiful white sand beaches on uninhabited islands, with exception of one island Koh Paluay which is populated with sea-gypsies who earn their living from fishing.

I have done this trip twice, first time about 7 years ago with some unknown boat operator in Fisherman's Village, and second time a coupe of years ago with Petcherat Marina crew. I really enjoyed it both times, but the company was much better second time around, so I will try to decribe this trip here and put some pictures which my hubby took on the way. I apologize in advance if I forget some details, but hope you will still get an idea.

So, early morning we arrived to Petcherat Pier. They would normally collect you from hotel, but as we have our own transport, we didn't really bother with transfer.
There was some food for those who didn't have chance to eat - sandwiches, toasts, tea and coffee, which was quite sufficient, you don't really want to eat too much just before a boat ride.
After  15-20 minutes we were told to get ready and go to the boat. The crew seemed quite nice and also really funny - they joked all the time and were creating this easy, carefree atmosphere, so if anyone was a bit worried about a ride - all their worries started to disappear right away, all passengers now looked happy and excited.

The boat ride was enjoyable - the sea was really calm. The crew offered us free drinks, including water, coca-cola and other soft drinks... 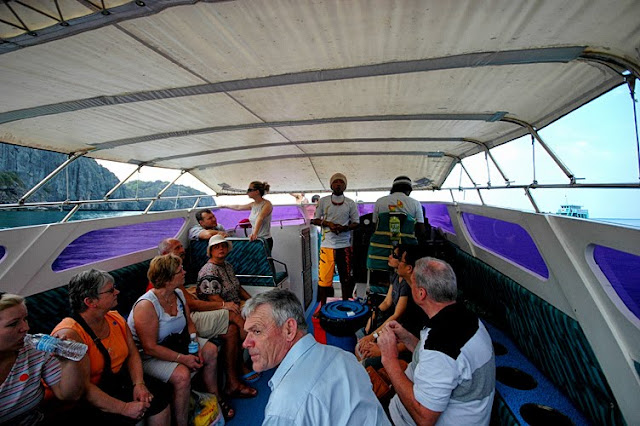 After a while we stopped for 1 hour snorkeling, marine life there is not amazing, you will not see much variety of fish there but it is still ok. The underwater scenery was great though, we really enjoyed looking at the rocks and corals...The crew supplied us with all equipments and life jackets. But I must admit - if you are REALLY into snorkeling and want to see a real variety of marine life - then you must go to Koh Tao/Koh Nang Yuan, the snorkeling is much better there.
It was still great and refreshing to just jump in the water and swim. After finishing snorkeling, we were cruising around for a while, enjoying magnificent scenery around us. 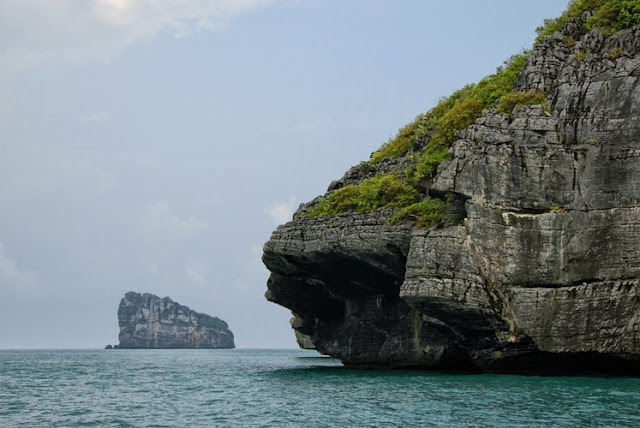 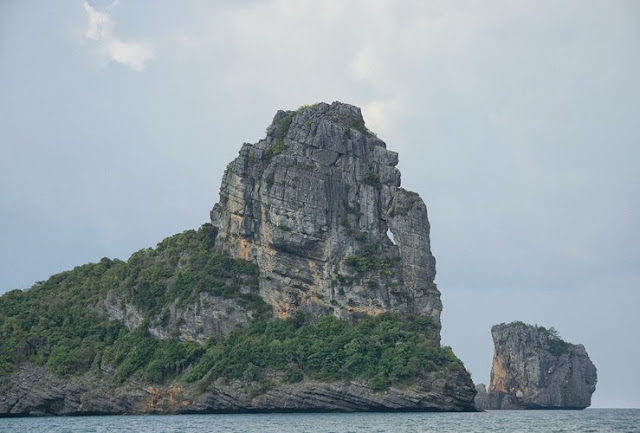 The boat finally brought us to the island with  Emerald Lake -  apparently one of the locations where movie "Beach" with Di Caprio was filmed. The lake was beautiful, we could even see small fish there. The lake was high up inside some hill, we had to climb up about 7-10 minutes, you have to be fit to go up there, I was breathless when I reached the top. There is an excellent viewpoint to Marine Park, we took a few amazing pictures on the top of the hill. 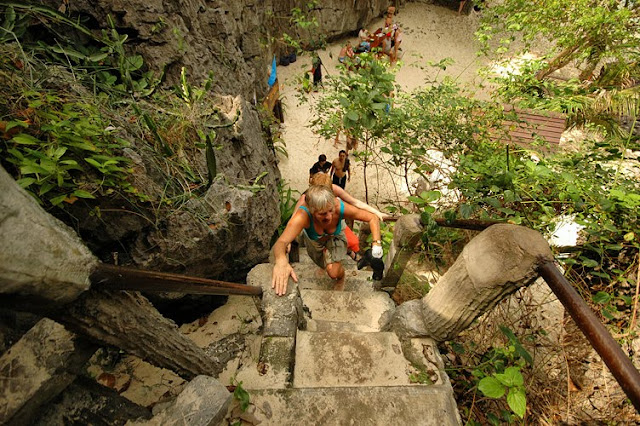 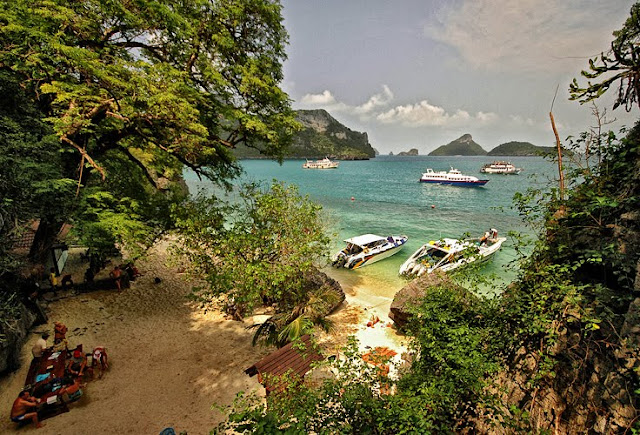 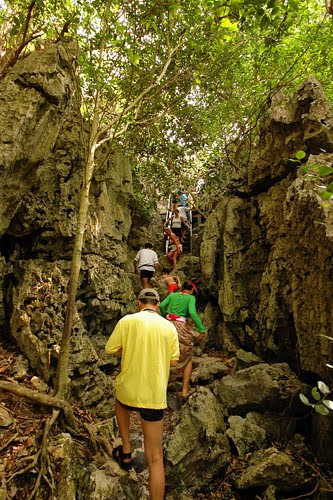 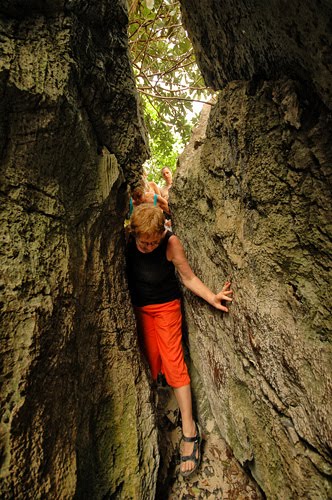 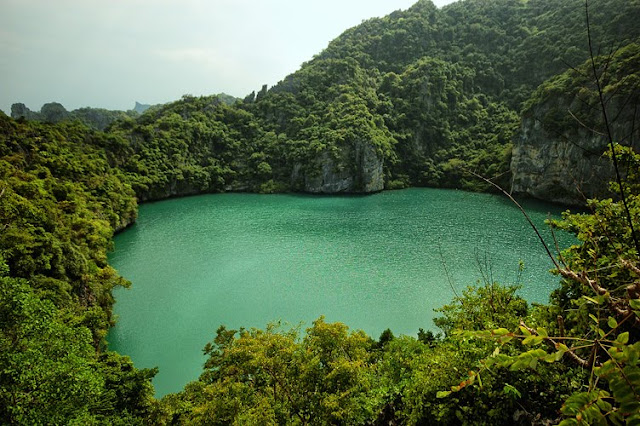 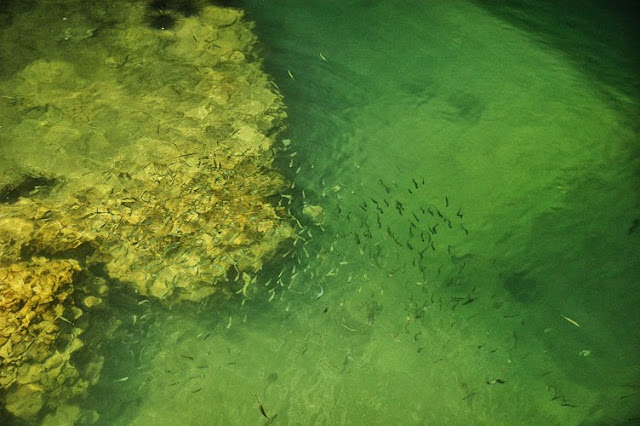 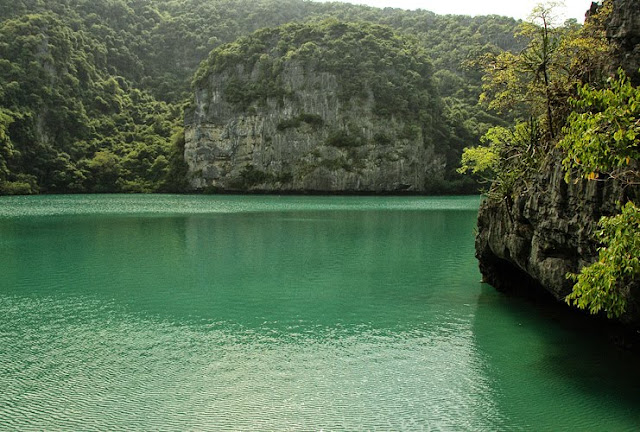 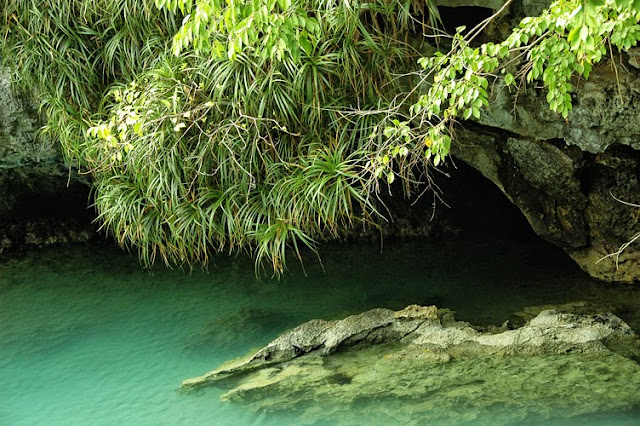 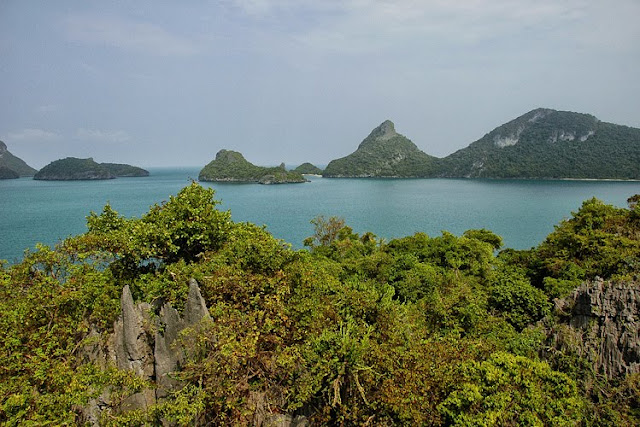 Finally we were done with the lake and taking endless pictures, went back to the boat and proceeded to the only inhabited island Koh Paluay where we had buffet style lunch and just wandered around looking at the life of locals people. We had some free time for swimming and messing around on the beach - and so we did! I even managed to get on the cover of our Samui's "Essential" magazine. 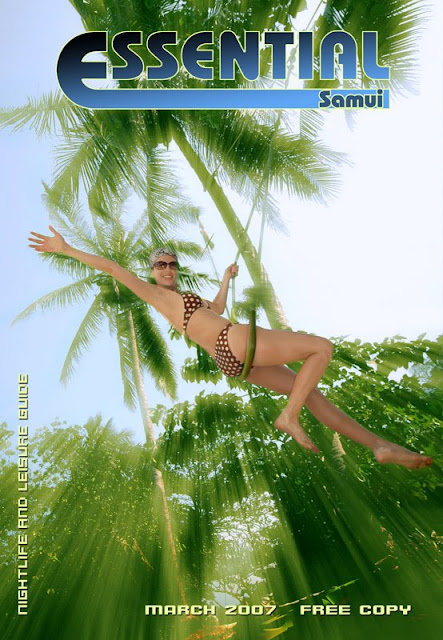 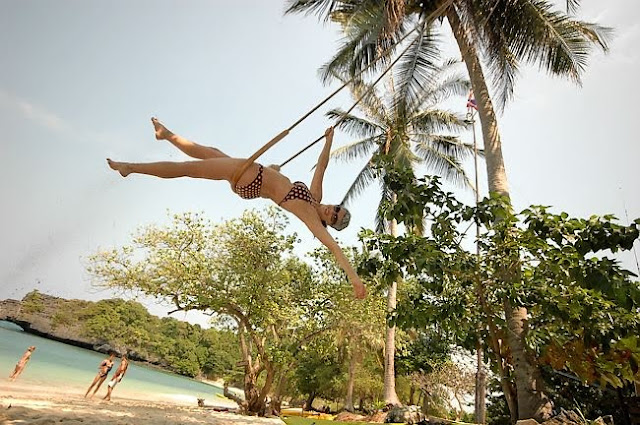 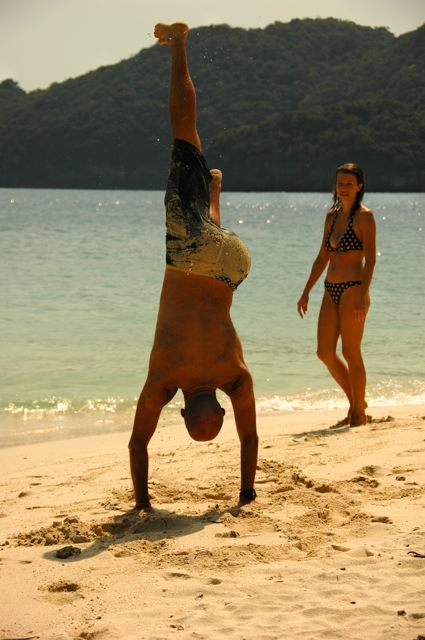 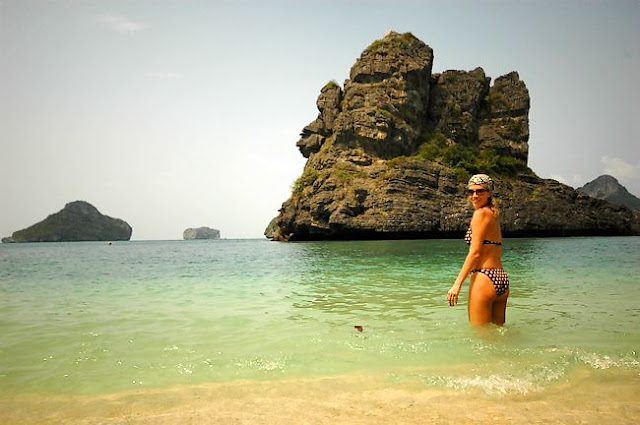 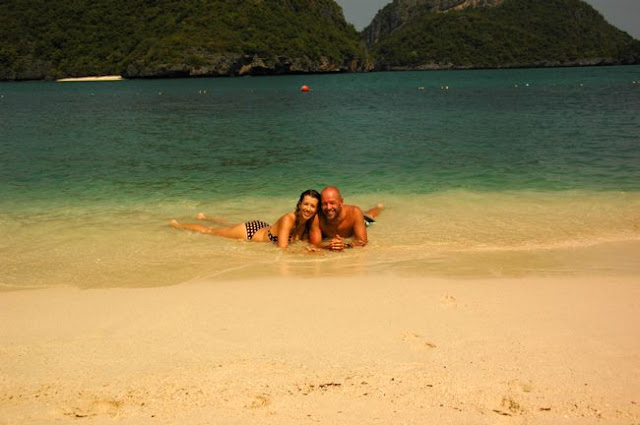 After a break we went kayaking, which was a good fun - highy recommended! We saw beautiful cliffs and amazing white beaches, caves and lagoons,and really enjoyed ourselves. 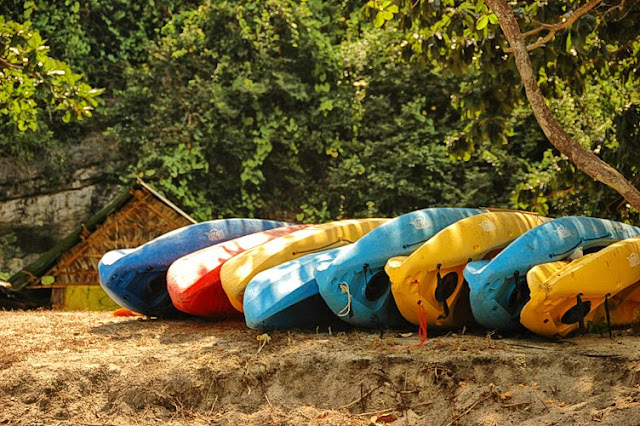 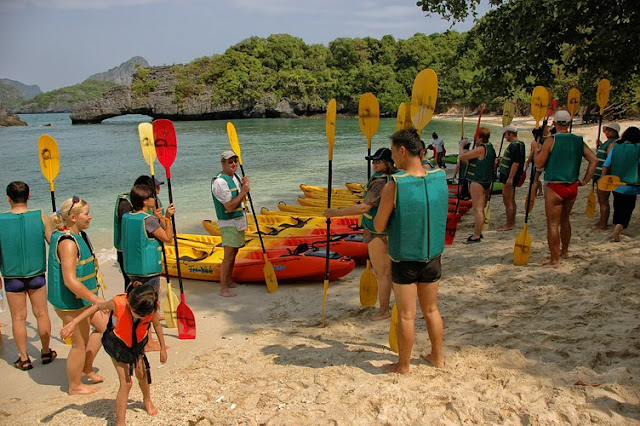 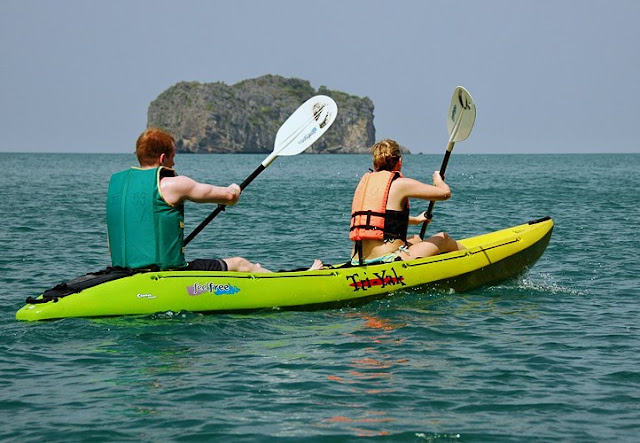 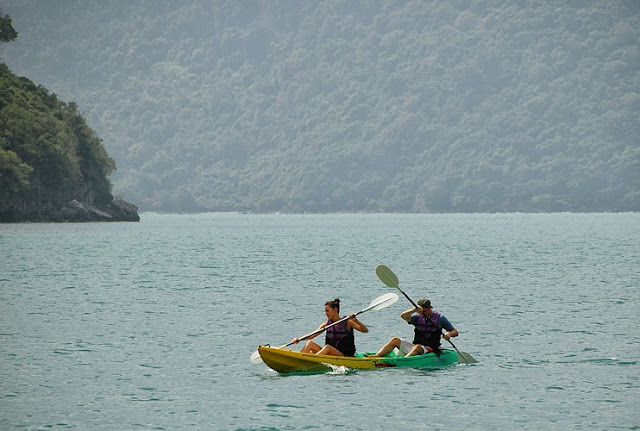 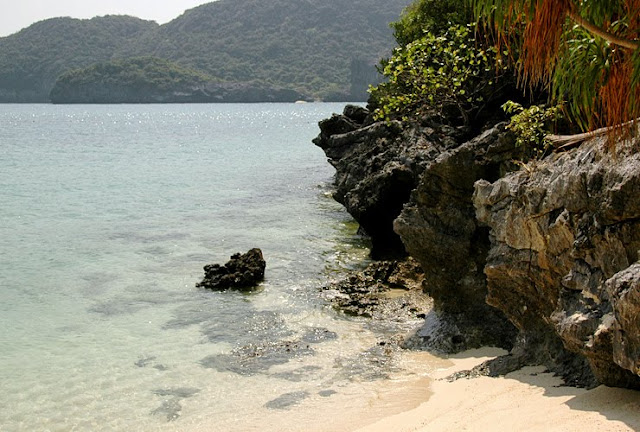 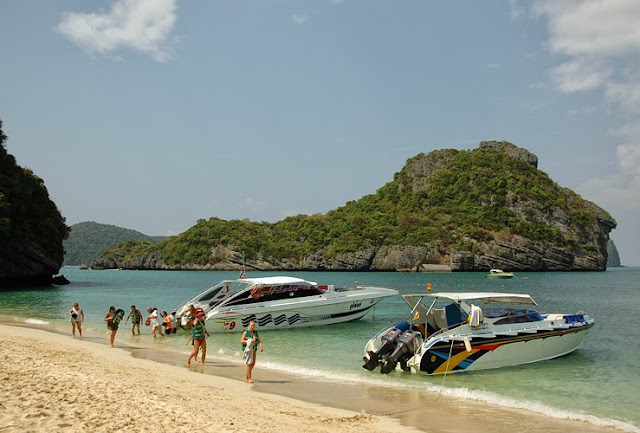 Our trip was coming to an end, we got back in the boat and headed back to Samui.
It was a perfect day and I would recommend it to anyone who loves beautiful scenery and sightseeing. 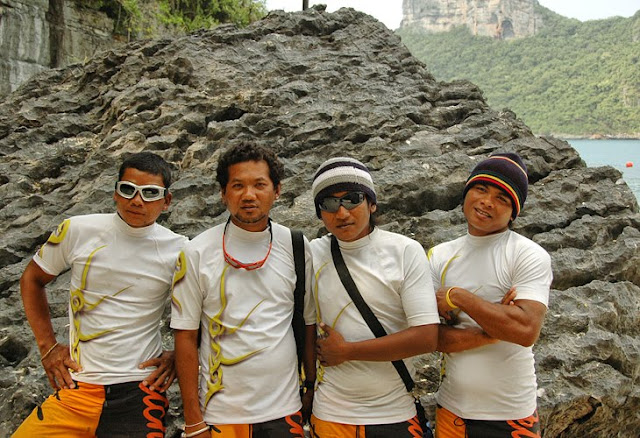 That was our Petcherat crew - great funny guys, who made this day memorable and enjoyable!
Posted by Elina at 2:32 pm