Beach Republic
Koh Samui - probably the most expensive place in Thailand, the island with an ambitious title "boutique island", now apparently a trendy and fashionable place, with its development constantly moving towards the higher-end traveller.

This island used to be a backpackers paradise until someone got that clever idea to start selling the land to the foreigners, who were quick to grab it and start building here and there, nice places and ugly places, legally and illegally, successfully and not very much so...
During the last 10 years quite a large number of travellers decided to settle down here, and they still do - everyone wants their own piece of paradise.

In the last issue of "Living in Style" island's newspaper , there was this article on the first page, called "Sign of the times" about Samui becoming synonymous with style and sophistication.
Apparently we are .."a new trendy and sophisticated crowd with whom it's all about the quality of the experience and the level of service provided, and this has resulted in a whole new industry to meet these needs..."
So, due to a sudden demand, now as a result we have a few million dollars houses here on Samui and we have hotels such as Four Seasons who charges mere 23 000 Bt per night!!!!!! Oh, yeah, they do! Anything else I forgot? Of course we have fine dining, luxury boats, beach clubs and exclusive spas and many more thing to fulfill the expectations of people, who seek luxury.

I've never really considered myself being very sophisticated, especially when you are kind of sweating here 24/7 , wearing hardly any make up, and your hair have seen a better day due to lack of good hairdressers here and lots of humidity, sun and swimming in a sea...
Even if I ever had something remotely resembling some style and sophistication when I lived in London, I think nearly all of it has been lost somewhere on the way from UK to Samui. All my stylish clothes were hanging neatly in the wardrobe for the last 3 years, waiting to be worn, I had to clean the dust from my stilettos as they also never see the light, and every morning I still find myself in the same Havaianas flip flops which I bought for 100 Bt in some market in Bangkok. 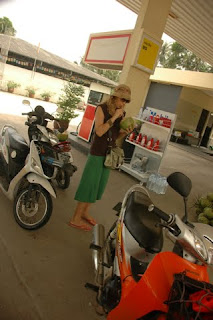 example of my sophistication

But thanks to the "trendy crowd" and its ever increasing demands, now we have a few nice upmarket places to go to, and one of them which I quite like is a beach club in Lamai called ''Beach Republic".

I haven't been there lately, been too busy I am afraid...I used to go there quite often, especially when I was pregnant and wanted to relax, then I had my baby and was busy ever since... 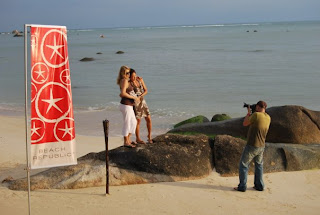 That's us, messing around on the beach there 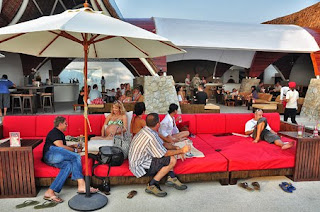 I am chilling on a day bed (look for the huge belly!)

If you want a great day on the beach - this is THE place to go. We have also glamourous Nikki Beach, but it's a bit too far and too expensive for me, so I stick to Beach republic.
I love their huge day beds by the pool, and I like the music DJs are playing, the beach and view are great, the food is good, the overall ambience is quite unique. I haven't tried their spa yet, so cannot give any review on this one, but hope it's as good as all the rest facilities there. 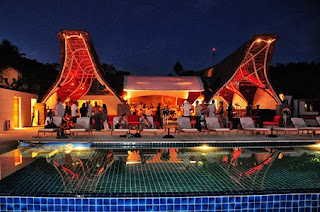 The place looks really good and stylish, they obviously didn't spare money on architect and as a result - design of this place is really impressive and eye-catching.
I like their Sunday Sessions - there is a lunch buffets and DJs playing till very late, you can spend the whole day there and you wouldn't even notice the time pass by. They have great coctails which you can sip while chilling out on those beds and listening to the music... 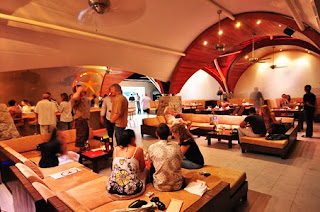 Great place to catch up with friends 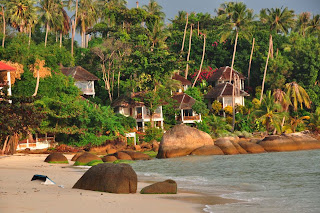 Beach outside
And I forgot to mention the perks - if you are a first time visitor to this island, keep your plane ticket, and if you come to Beach Republic and show them your boarding pass within 72 hours - they give you a free bottle of wine!!!
Posted by Elina at 9:24 am